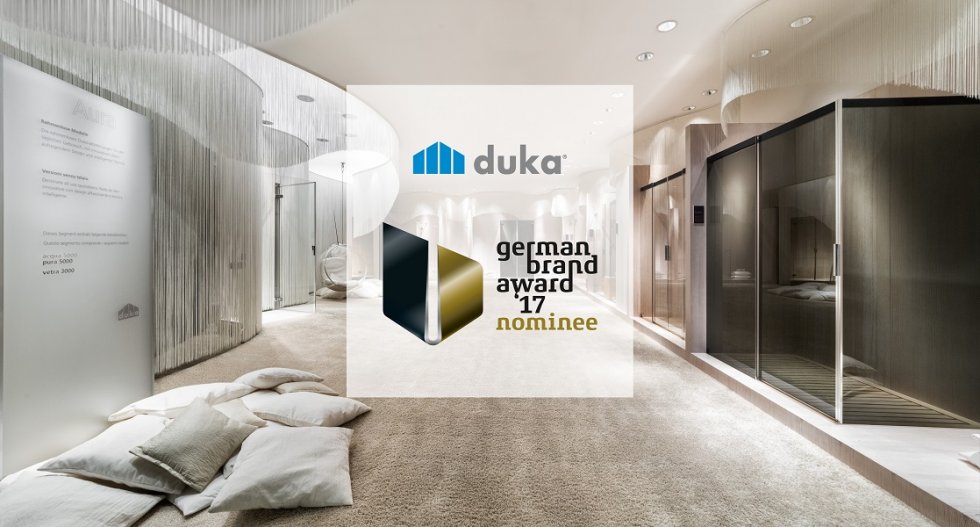 duka is a proud nominee for the German Brand Award 2017! The nomination puts emphasis on the continuous development of the company, which has established itself as one of the leading manufacturers for shower enclosures in the last years.

The German Brand Award honours enterprises for their successful brand management in Germany. 2017 it presents and awards unique brands for the second time in a row. The figures speak for themselves and impress: more than 70 million people were reached by media reports last year.

Synonymous with elegance and simplicity, the colour black becomes a refined choice in the bathroom, evoking a new minimalism and underlining the pure lines of the design. > more about

The gallery 3000 new series combines traditional values with modern technology. Modest and yet special - a unique composition with harmonious proportions gives the models an extraordinary expression and underlines their lightness. > more about

Swissbau in Basel is the leading construction and real estate exhibition in Switzerland and duka is a regular guest. In mid-January we were part of the exclusive stage of the "Trendwelt Bad" where we presented our new products: from alternative installation options to new design variants and completely newly developed entrances.> more about

9000 square metres of exhibition space, 120 exhibitors: Frauenthal Expo in Vienna is increasingly becoming an important showcase for bathroom furnishings in Austria. This year, we were present with our enhanced model series of libero 5000 Inlab and gallery 3000 new.> more about

A new framed version of the libero 3000 in 6 and 8 mm tempered safety glass, which is also available in special sizes in height and width.> more about

A new type of mirror glass complements the existing glass versions in this model series, transforming it to an even more extraordinary item of furnishing in your bathroom. The new glass influences the visual perception of space in the bathroom and impresses with the elegant mirror effect.> more about

An exciting year is coming to an end! Before we ring in 2020, we’ll take the opportunity to review the year together with you. > more about

duka took part again this year at the Architect@Work in Milan, which is dedicated to the world of design. > more about

duka returns to Cersaie, in the 2019 edition, and presents a series of interesting innovations that enrich the catalogue from the stylistic and technical point of view. > more about

The World of duka not only has a new name, it also has two awards under its belt. dukaversum brought home two titles from the world-renowned German Brand Award in Berlin. > more about

duka is the "Winner" of the ADI Ceramics & Bathroom Design Award 2018! > more about

duka returns to Cersaie, in the 2018 edition, and presents a series of interesting innovations that enrich the catalogue from the stylistic and technical point of view. > more about

duka’s vast range of 3D shower enclosures finally completes one of the most wide-reaching "design libraries”.> more about

Numerous innovations contribute to the various design trends and also expand the extensive product portfolio with additional functional solutions for a wide range of bathroom situations.> more about

duka confirms its presence at the Batibouw 2018, emphasizing the importance at the Belgian market and the target audience professionals. > more about

Collecting more than 100,000 visitors, the SWISSBAU is the largest construction fair in Switzerland and a fixed date in the fair calendar of duka AG. This year, the presentation of the South Tyrolean specialist for shower enclosures was marked by the evolution of the natura 4000 model series and the renaissance of the color black. Curious? Check it out. > more about

duka is “Winner” of the German Design Award 2018

Technology in a nutshell - duka receives the “Winner” award from the German Design Award 2018 for its “duka icons”. These intuitively understandable symbols identify the technical highlights of the duka products and highlight functions such as UV bonding, doors with a lifting / lowering mechanism or auto-close-system. > more about

The new elegant design emphasizes the harmonious silhouette of the shower enclosure and adds a refined accent to the clear geometry of the product. > more about

Professionalism and a clear brand message were the basis for success at this year's Cersaie, the Italian trade fair for bathroom and sanitary ware. Many visitors came to the duka stand and were interested in the latest and new products. > more about

We created the new natura 4000 range as an evolution of our classic “dukessa-S” and “natura” shower enclosures, in aesthetics as well as performance. The new natura 4000 is a technically innovative product of harmonious proportions and the clear-cut geometry of a minimalist linear design. > more about

duka wins the German Brand Award 2017 with the distinction “Winner”! The South Tyrolean shower enclosure specialist receives this remarkable award for its outstanding brand management in the class “Industry Excellence in Branding” within the category “Heating & Bathroom”. The project “duka 4.0”, the future headquarters of duka in Brixen, convinced the jury of the duka brand concept. > more about

For the first time this year, the Water • Light Festival takes place in Bressanone from May 5th until May 21st. Visitors have the possibility to experience different locations, which, through light and art installations, are interpreted in completely new and innovative way and hence transform the city into a spectacular light place. > more about

duka presents itself at the fair in Hennef with a spacious and light flooded wooden stand that radiates naturalness and emphasises cosiness with warm accents. > more about

duka surprises with a striking stand: spacious, light-filled, radiating naturalness with the use of warm wood and cozy accents. > more about

duka at Batibouw - a success becomes a tradition! For the third time in a row, duka exhibits its products at Brussels and presents itself with a new stand concept to the specialist audience. > more about

Hans Krapf, businessman and founder of the traditional South Tyrolean company duka, was named Manager of the Year by the daily newspaper “Dolomiten”. > more about

duka have been awarded a “Special Mention” from the German Design Award 2017 for their new stila 2000 shower enclosure. > more about

With the new stila 2000, duka has redefined the boundaries of the Quadra collection: Height-adjustable rollers, minimal overlap of glass panelling, with a convenient mechanism to allow ease of opening from the outside for cleaning, improved water-tightness through optimised gaskets and seals, ergonomic handle to ensure perfect closure, frames with no visible screws. > more about

At the IFH/Intherm Nuremberg, the trade fair for sanitary, heating, climate and renewable energies, duka presents itself with a spacious and light-filled stand, showing the design of the shower enclosures as well as this year’s numerous new product and services. > more about

Glass here plays a prominent role, and to ensure the glass retains its brilliance over the years to come, duka has introduced a new glass coating called “ProCare”. > more about

duka back to Brussels for the 2016 edition of the Batibouw fair, with a striking stand: spacious, light-filled, radiating naturalness with the use of warm wood and cozy accents. > more about

Design Experience "On the Road"

One of the essential components for an excellent product is the service with which it is offered... > more about

pura new "The essential lies in the detail" > more about

New Service - duka QR Code! All information on the shower enclosure easy to access. > more about

Designed as quality features, the duka icons express the various technical features that distinguish our shower enclosures. Now these icons were put together into one folder where they are briefly explained. > more about